Inspirational farmer Rob Cook has purchased a Fuso Heavy truck and dog for the family’s cattle operations in South East Queensland. The former rodeo champion was left a quadriplegic after a helicopter crash on a Northern Territory station in 2008 and was told he could not return to his life on the land.

Rob is unable to feed himself, with just enough strength in his upper arm to operate a joystick controller, but with a mixture of determination, support from family and friends and technology, he proved his doctors wrong. He and his wife Sarah operate three cattle properties and have just opened their own butcher shop in Bundaberg serving their own quality meat. 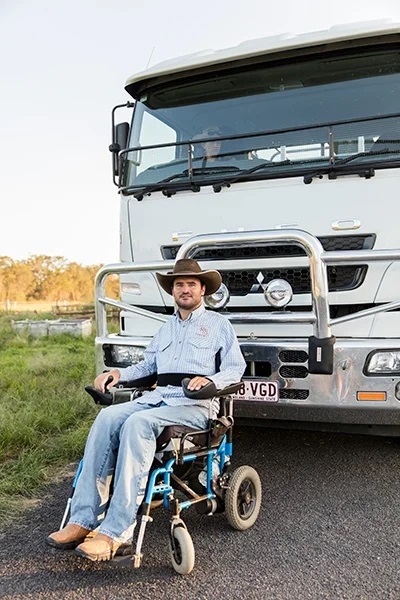 Rob had been paying a fortune for sub-contractors to move cattle between properties, which seemed a waste given Sarah was happy to do it and had a multi-combination (MC) licence. Rob’s diesel fitter mates told him Fusos were solid and reliable, so he started researching the large Heavy models online. He found a new rigid cattle truck specification Fuso Heavy at Westco Trucks in Mackay, Queensland, and snapped it up.

Rob then had Moore trailers near Toowoomba build a custom dog trailer that suited their needs. "Because the truck has rear airbags, we just built an A-frame at the same height as the truck, so you can just dump the airbags and drive out from under the stock crate, making it easy and versatile for shifting equipment between farms," Rob says.

Running without the trailer, operations manager Matt Orgill can help move machinery and feed, including 10 tonne batches of molasses lick, while Sarah takes over when the jobs require the use of the dog trailer. She has a non-synchro manual licence and has used them on properties before, but the Fuso Heavy has an automated 12-speed transmission, which means there is one less job for the driver.

"It really is no effort to drive," says Sarah. "It’s easy. I was a bit worried going out for the first time with the dog trailer up the Bruce Highway, but it was ok. It generally takes me a little bit to settle, and feel where you are sitting on the road and then it is fine."

The Heavy runs a Daimler-sourced 12-litre six-cylinder that makes 400hp.

Cook was forced to change the way he farmed and has adopted smarter and leaner techniques. Using everything from electro-hydraulic farm gates, Bluetooth positioning sensors, voice recognition software, telemetry and good old cattle dogs, Rob is able to do much of the work from his electric wheelchair. Sarah is at Rob’s side for many of the active parts of operations and drives him between stations in a customised 4x4 Mercedes-Benz Sprinter van. Rob can traverse some of the paddocks with his off-road electric wheelchair, but is having a special ATV modified so he can go further. He manages much of the family business and uses voice automation computer technology to get things done.

"All my business, all the transactions are done with Dragon (voice recognition software), absolutely every aspect; buying cattle, selling cattle on line, all my supplies, all my steel for the cattle yards."

Sarah pushed Rob to use computer technology, despite initial frustrations, and he is glad she did. Rob had no interest in computer technology when he lived on their family cattle station in the Territory; "I hadn’t Googled a thing before the accident or sent an email." With a love of working cattle on horses and simple living in the outback, Rob says he always thought had been born 100 years too late.

Rob changed his mind after realising what it would be like as a quadriplegic with none of the technological aids he uses today. "I have been talking to people from back in that era and they say we don’t realise how lucky we have got it now, which I can see," he says.