Fuso has been manufacturing hybrid trucks since 2006 and selling them in Australia since 2009.

“Our customers' experiences over a long period of time have clearly demonstrated that our 1st generation hybrid technology was capable of constantly saving significant amounts of fuel in both city and suburban applications, not only in Australia, but internationally as well. Tests conducted with Star Track Express resulted in the Eco-Hybrid saving an average in excess of 30% compared to their diesel only Canters” said Richard Eyre, General Manager for Fuso Trucks & Buses in Australia.

With more than one thousand Fuso Canter Eco-Hybrid trucks driving the world daily, Fuso has been able to accumulate vast quantities of invaluable data from more than 5 years of field experience. This data has been instrumental in the development and design of this new model.

While the first generation hybrid proved that the technology worked and demonstrated significant fuel savings, the second generation Canter Eco-Hybrid has been designed not only to offer customers a truck with superior environmentally friendly credentials, but also a more affordable and financially sound transport solution - which is achieved through its fuel saving performance and more attractive purchase price.

In short... the new Fuso Canter Eco-Hybrid is not just a truck that appeals to a niche group of environmentally conscious customers. Rather, it is a practical solution that has been developed for the mass market, appealing to a much wider range of trucks customers because it’s not only cleaner than a diesel only truck, but its return on investment makes economic business sense!

Many of the core components have been greatly improved over those used in the 1st Generation Eco-Hybrid and many of them can already be found in Fuso’s Euro5 diesel only Canter range.

The 4P10 3L engine was developed for its ability to reduce fuel consumption in order to reduce operating costs and minimise its impact on the environment. In fact, fuel economy is so good that it already met the 2015 Japanese fuel economy standard when it was first introduced into the Canter range in 2010. This engine not only meets Euro 5 emission requirements… it exceeds it and surpasses the rating requirements for Enhanced Environmentally Friendly Vehicles (EEV) classification.

The introduction of the more powerful and cleaner 4P10 EEV compliant diesel engine and a more powerful electric motor results in a more pleasurable driving experience and there is no longer a power disadvantage between the Eco-Hybrid and its equivalent diesel only model Canter (110kW vs. 96kW and 40kW vs. 35kW used in 1st generation Eco-Hybrid).

Drivers will really appreciate the addition of Fuso’s exceptionally smooth DUONIC dual clutch AMT. This gearbox has received significant praise since its introduction in mid-2011 and Fuso believe it to be the best transmission currently available in a light-duty commercial truck. It has a wet, maintenance free clutch for hassle free driving, as well as park function, creep and Eco-mode. The DUONIC feels like a full automatic and can tow as much as a manual gearbox (no penalty to GCM).

An Idle Stop/Start system (ISS) allows the driver to turn the diesel engine off and on at traffic lights. When switched on, ISS is automatic and triggered by the brake pedal. The engine switches itself off when the driver places their foot on the brake pedal and the truck comes to a complete stop and it restarts as soon as they lift their foot off the brake pedal in preparation to take off. The ISS system allows for even further fuel consumption savings and reduced emissions.

The hybrid system has improved in several significant ways. The Electric motor now develops / generates more power. Peak power has increased to 40 kW from 35 kW and peak torque is available from 0 rpm to 2000rpm, an increase of over 400 rpm in range. These upgrades allow the motor to capture and re-use more braking energy. The motor is now oil cooled rather than water cooled.

The new Hybrid also comes with Canters class leading 30,000km service intervals. Longer intervals not only mean lower maintenance costs but also less time in the workshop, which means your truck can spend more time out on the road making you money. The Lithium Ion battery and whole hybrid system is guaranteed for 10 years, meaning there is no additional costs or maintenance to the business to consider.

The Fuso Eco-Hybrid is designed to deliver its best results in stop/start traffic conditions and low to medium speed applications.

The new Canter Eco-Hybrid aims to continue to raise the bar offering not only better fuel economy and lower emissions, but also a significantly better drive experience and much more attractive payback period than its predecessor. It is the focus on improving the affordability of this model which will see the 2nd generation Canter Eco-Hybrid expand its appeal to a much wider range of Australian businesses and not just typical hybrid customers who have been prepared to invest in environmentally friendly technologies to date. 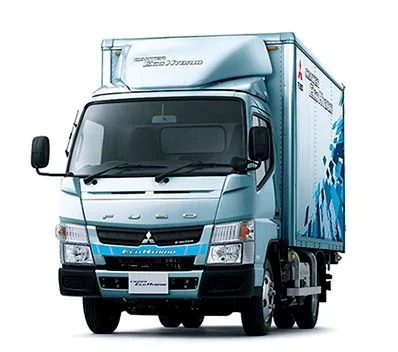 The Canter Eco Hybrid features a parallel hybrid system. That means power to drive the vehicle comes from the vehicle’s electric motor, the diesel engine or both. Fuel efficiency and engine exhaust emissions reduction are achieved by using them singly, or in combination with each other according to driving conditions.

The hybrid system switches its operational mode according to the driving situation. The electric motor is used to drive the vehicle when starting off. During hard acceleration, both the diesel engine and electric motor/generator power the vehicle. When cruising, the vehicle is driven by the diesel engine only, like a conventional vehicle. When slowing down or braking, the electric motor/generator functions as a generator to convert braking energy (normally lost as heat) into electric energy and store it in the lithium ion battery. The automated manual transmission contributes to the process by providing smooth and efficient shifting during operations.

Overall, the Canter Eco Hybrid’s concept strives to achieve an ideal balance between lower engine exhaust emissions and fuel consumption, and ease of operation for driver and owner.